This year’s NCAA Basketball Tournament was definitely one of the tournaments that had many upsets. The favorites Villanova and Kentucky were eliminated in the early stages of the tournament alongside teams with a rich history, Duke and Kansas. The last time that a player rated best overall in the rookie class got to be featured in the tournament finals was when Anthony Davis’ Kentucky Wildcats won the championship in 2012. This particular point pretty much sums up how unpredictable the tournament is. The point also proves that even with a key player in the team, the factor of success in the tournament is how well the team plays team basketball.

Talking about team basketball, the finalists of this year’s tournament the Gonzaga Bulldogs and the North Carolina Tar Heels were both teams without a definitive star in the team. Prior to the game, many analysts wondered how the two teams with similar approaches will square off in the national finals.

Throughout the whole game, no one jumped in front as it was a neck and neck game as there were 14 lead changes and 11 ties. The team with a clear advantage in the offensive side was definitely the Bulldogs with 42% from the three-point which was triple that of the Tar Heels’. However, the Tar Heels were still able to give the Bulldogs a hard time on their offensive end with their 15 offensive rebounds and bully-ball in the paint throughout the game making up for their terrible shooting.

The Tar Heels were successful inside the paint mainly because of the quick fouls forwards Zach Collins and Przemeck Karnowski picked up during the game. Eventually, Collins, who played a major role in the semifinals, was fouled out from the game with less than 16 minutes left on the clock. After Collins fouled out, it became tougher for the Bulldogs as they were forced to depend heavily on their backup forwards.

The success that junior guard Joel Berry II of the Tar Heels had on the game, logging 22 points, definitely didn’t help for the Bulldogs as they eventually gave in to the Tar Heels. Although the effort was clearly there for the young Zags, it was not enough to pull off a consecutive upset on the North Carolina Tar Heels as the experienced Tar Heels were ready this year.

With the proving ground over for the college athletes that are applying for the National Basketball Association’s NBA Draft this year, it will be interesting to see who will be taken first overall. Currently, the draft stocks of many potential stars including Lonzo Ball, Markelle Fultz, De’Aaron Fox, and Josh Jackson’s are shrouded in mystery as analysts all express shame that they were eliminated early in the tournament. Although there were players key to the finals, it seems as if there is no player other than Zach Collins of the Gonzaga Bulldogs this year that has a chance to be drafted within the top ten picks. 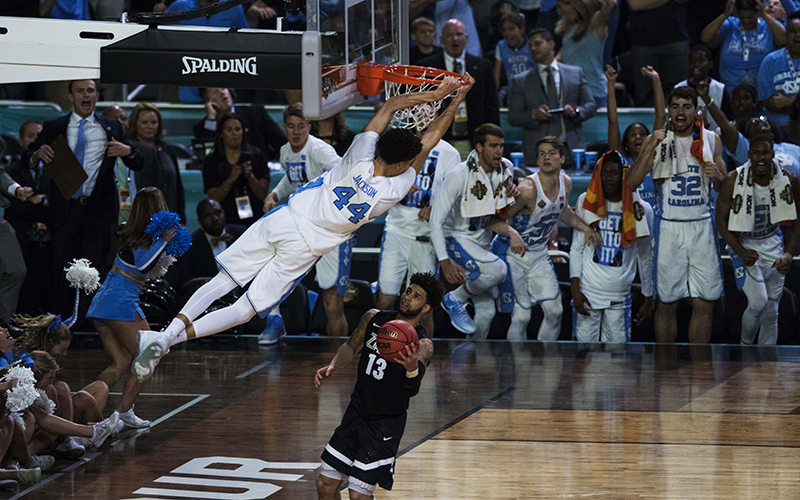